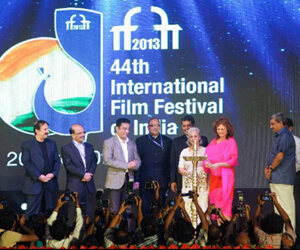 Cinema is an important part of Indian culture. Being a medium that reaches out to a vast audience, it has the ability to influence many and communicate a message to the masses in an instant.Its AV medium is what makes it one of the most unique forms of art.

Over time, the film industry has lost part of its charm to revenue generation and has left behind its artistic side. However, there are still many platforms that celebrate the art filmmaking, and those are none other than our very own film festivals. Here are a few film festivals that showcase the

Mumbai is home to India’s biggest film industry, Bollywood. It is also home to countless talented film makers who light up the silver screen with their art. This makes Mumbai the perfect place to celebrate cinema through the Mumbai Film Festival (MAMI). Held in October-November, it showcases independent, art house, Bollywood and even Hollywood films.

Women have been an integral part of Indian cinema since its inception. Be it through their acting or their direction, Indian cinema would be incomplete without them. The Mumbai Women’s International Film Festival celebrates exactly that spirit of women in cinema by showcasing films made by women. First held in 2013, it has grown in fame ever since.

Dharamshala is a beautiful and calm location that sits among the Himalayas. Even though there were a number of talented film makers that came out of this region, there weren’t many opportunities to showcase their projects. Dharamshala residents Ritu Sarin and Tenzing Sonam started the White Crane Arts & Media Trust to promote independent films. A few years later, they initiated DIFF in 2012, irrespective of the fact that there were no cinema halls in Dharamshala.

Goa is known to be a tourist and vacation hotspot all throughout the year. However during the month of November it is specifically known for the International Film Festival of India. Being one of the oldest and most prestigious film festivals of the country, it brings in a lot of cinema lovers.Since 1925, it has seen everything from mainstream to arthouse films that are screened over a period of 10 days.

5.Bring Your Own Film Festival, Puri:

Puri, Orissa is known for its beautiful beaches, the vibrant local culture and the BYOFF. Held in the month of February, it brings the town alive through a carnival that celebrates the art and love for film making. It is a platform open to all where anyone can showcase their work. The festival is held on the beach and is nothing short of a party under the stars.

These are just a few of the many Film festivals across India that cinema loves must be a part of. If you have attended any film festival recently and loved a feature, do let us know in the comments below.