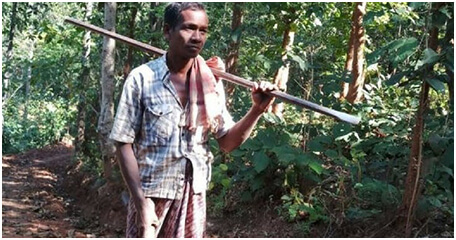 In a heart-warming story coming out of Odisha, Jalandhar Nayak, a 45-year-old tribal man from the village of Gumsahi in Kandhamal district, worked in grueling eight-hour shifts every day for two years to single-handedly construct an 8-km-long stretch of road through hillocks to Phulbani town. He plans to extend it by another 7 km in the next three years.
What prompted Nayak to undertake this herculean task? As someone who never enjoyed access to education, the man wants to ensure that his three sons are not deprived of the same. To reach their school in Phulbani town, however, children had to cross these hillocks, which was both time-consuming and difficult. Nayak sells vegetables for a living, but the sight of his children undertaking that arduous journey pushed him to the extreme effort. In response to his children needs, he picked up the hammer and chisel and went to work on constructing a shorter route between his village and the town.
Fortunately, the local district administration took notice of his efforts after local Odia publications reported his herculean feat. “Nayak’s effort and determination to cut mountains to build a road left me spellbound. He will be paid under the MGNREGS scheme for all the days he has worked,” said district collector Brundha D.