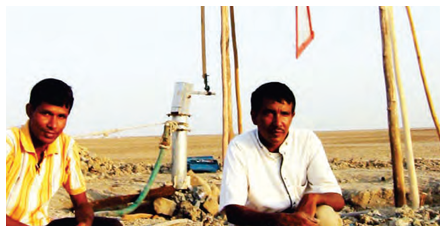 Mohammad Methar Hussain and his brother Mushtaq Ahmad from Darrang district in Assam grew paddy in the winter season (also known as bodo paddy). Irrigation involved a lot of manual effort and using diesel sets for pumping water was a huge drain on the resources. To tackle this issue, Methar thought that if they could run a large wheel on wind power, and connect the wheel to the hand pump, that would serve their purpose quite efficiently.

So, both of them started working on making a windmill unit from locally sourced materials such as bamboo wood, strips of old tyres, pieces of iron, etc. With the help of a carpenter, the first prototype was ready in four days. Based on the feedback received from salt farmers, GIAN W improved the design and developed a multi-dimensional model which was installed at LRK in 2008.

Understanding the diverse needs of farmers to increase the efficiency of windmills, GIAN W joined hands with Alstom foundation for design modification and improvement. As of 2012, 25 of these windmills have been installed in Kathivadar and Kadiali villages in Amreli district.