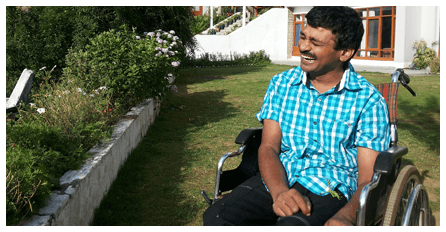 Cerebral palsy is a group of permanent movement disorders that appear in early childhood.Yet, Riitesh was never one to be cowed down by circumstances. He had just passed with flying colours from his CBSE school (securing 75% in his board exams) when his quest for independence led to him invent his own ‘trike.Soon Riitesh was using the trike to get around town, often going as far as 10 km all on his own, teaching in nearby villages as a part of literacy campaigns became easier with the trike, as did attending his B.Sc classes in Kurukshetra University. Says Riitesh, “The trike gave me wings! And I was glad that this was my own innovation.”Next, Riitesh opened a computer centre that was affiliated with the National Institute of Open Schooling. Here, he taught children – and some interested adults – the basics of computers.In 2011, Riitesh landed a job at the Districts & Sessions Court in Karnal. “But after a few months, I was ousted from the job on the grounds of my disability,” he recounts. “I then approached the High Court with my case. The Court asked me to submit to an ability test. I did and I won the case. The Court quashed my termination order.”