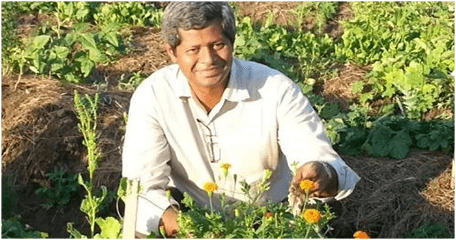 A 50 year old, Mumbai resident, Suneet was running his stable business. But somehow he was not satisfied. He always wanted to work for the farmers and enhance the field of agriculture. He finally decided to work towards his desire; this became possible when he met Pratik residing in Murbad. He was a guest professor, where Suneet’s daughter used to study. As suneet started looking for a land to start his agricultural activities, his daughter introduced him to Pratik who had similar goals and wanted to work towards it. Both of them pointed out the shortcomings in the agricultural field and started working towards it. It was also noticed by them that the villagers only cultivate paddy and the land goes unused from November till the next monsoon season. It took them eight months to convince the farmers. Today, Pratik focusses on paddy farming, Suneet works on making sure their farming methods do not harm the ecology.