It’s good to see that Tattoos are so widely celebrated, and bold moves by these celebrities make tattoos even more interesting! Tattoos bring about transformation, companionship and commitment to the person bearing it. Here are 5 celebrities who sport a few epic tattoos and the meaning of these tattoos.

The former undisputed Heavyweight Champion of the World Michael Gerard Tyson is known not just for his boxing, but also his iconic face tattoo! Some fans dig it, while some do not. According to Tyson in his documentary, just like the ancestral tattooed warriors with face tattoos such as the Maoris, Samoans, Polynesians, and so on, his facial tattoo represents “warrior spirit”. Besides the face tattoo, Tyson’s also got Mao Tse-Tung & Arthur Ashe tattooed on his arms, and Che Guevara on his abdomen. Dwayne Johnson also known as “The Rock” has a meaningful Samoan tribal tattoo sleeve on his shoulder, dedicated to his family & spirituality. The patters that make up the sleeve symbolize a lot of things. Such tattoos contain coconut leaves or niu’a tattoo that denotes a Samoan Chief Warrior, a Sun that stands for good fortune, tattoos about his wife Dany, and his daughter Simone Alexandra crawling to the chest, next to his heart. There are descending swirls of past, present & future with the future becoming bigger, two eyes called “O Mata E Lua” to represent his ancestors watching over his path, the Great Eye a symbol that allows its bearer to possess the spirit of the enemy, a broken face marked with shark teeth a symbol of his strength & struggles, some stones of achievement & abundance to represent the foundation of life, and a tortoise shell to deflect evil spirits.

Wow! Now that’s what you call a meaningful tattoo! 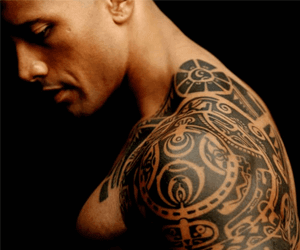 This design on Johnny’s arm, which features a sparrow flying in front of a sunset with the name “Jack” beneath it, was originally a fake, and was drawn on Depp for his role as Jack Sparrow in the “Pirates of the Caribbean” films. In honour of his son, John “Jack” Christopher Depp III, the star had it slightly altered and inked into his skin for real! 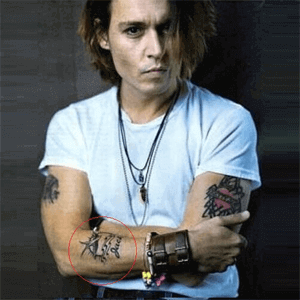 Kevin just got a tattoo of the world map, which Pietersen said was ‘just the reflection!’ – His tatt has red stars on certain places around the globe… but can you guess what it means?

We came to know, that the stars in his tattoo indicates somewhere Pietersen has scored an international century!
Let’s hope that his tattoo is full of stars before he retires!

This tattoo is just one of the other 32 tattoos that David Beckham has! This one on his forearm features a large Roman numeral seven, which is inked on the inside of his right arm. The number seven is significant to Beckham because it represents his jersey number for both Manchester United and England. Oh, and is also the middle name of David’s fourth child, Harper Seven Beckham. 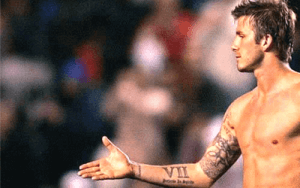