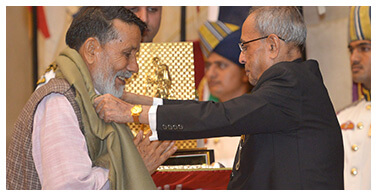 Chandi Prasad Bhatt considered as the father of India’s environment movement was born on June 23, 1943 in the district of Chamoli, Gopeshwar. The famous Dasholi Gram Swarajya is found by him, which later became the mother organization of Chipko Movement. Since childhood, Bhatt always wanted to do social work for the betterment of the people and fighting against domineering government policies on forests. He initiated one of the biggest Independent India’s people’s movement which turned out to be very successful. He was awarded the Padma Bhushan award for the same and was also honoured with the Ramon Magsaysay award for community leadership.