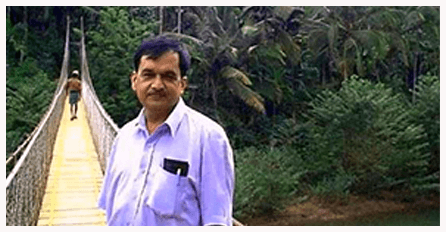 GirishBharadwaj – The “Bridge Man” of India

A wise man had a challenge that five years of engineering college had not prepared him for. Several months later, the villagers had their 87 metre-long footbridge and Karnataka had found itself a new hero. Nearly 80 bridges and 12 years later, Bharadwaj is now able to mobilise the support of the state government as well for his low-cost venture. “A concrete bridge takes at least 18 months to build,” he says. “The suspension bridges take only three months.” With more than 100 requests for bridges pending before him, the 60-year-old is looking forward to his retirement. “It is time for others to step in,”