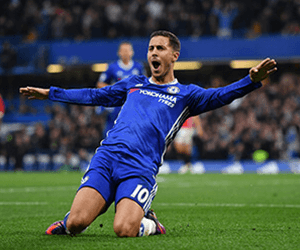 This season has been dominated by the blues and majority of the players have been from the title winning team. But, there are a few which outshined even the big boys from the big clubs. A season where the players from Chelsea and Tottenham stole the show, we have collated a list of top 4 premier league players of the season:

No points for guessing who tops our list! Deserved to win the Football Writers Award and the PFA Players Player of the year. Kante proved what he is worth and Chelsea’s fortunes changed and how! He has been super influential for the blues this season and deserved to win every accolade he has received this season!

“Harry Kane – hurricane”, as called by the fans all around the world is the young star on rise. At the mere age of 23, he has the world at his feet! For the first time, after 22 years, Tottenham have finished above their bitter North London rivals Arsenal and majority of the credit goes to Kane. He was the top scorer of this season with 29 goals.

Eden Hazard has been the most influential player for Chelsea and his form has determined the teams performance since his arrival in 2012. The Chelsea player of the season has been in scintillating form this season and has provided the fans with some mesmerizing performances throughout the tournament. He is highly rated and definitely one for the future!

The U-21 player of the season, Dele Alli is a young kid on the block who is rising high day after day. Scoring 18 goals being a midfielder is no cakewalk and Alli has defied all odds and made sure he is no 1 season wonder. With 7 assists to his name makes his a complete midfielder and a managers dream.